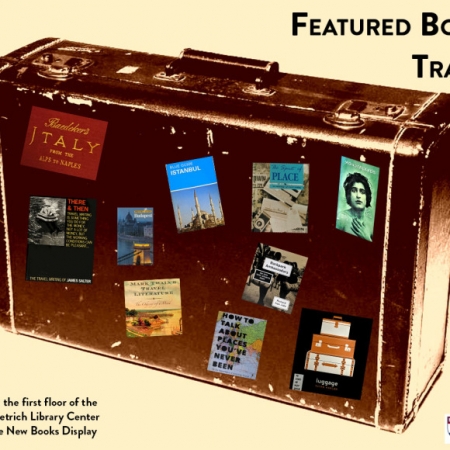 Earlier this month, Vienna’s tourist board made headlines with its new ad campaign, “Unrating Vienna.” Unrating Vienna uses excerpts from real online reviews plastered over photos of the sites in question; for example, a one-star denunciation that “paintings are disgusting” projected onto the edifice of the Leopold Museum. The campaign is meant to encourage travelers to explore Austria’s capital sans preconceptions by discouraging them from reading reviews beforehand.

It is in the same spirit of open-minded discovery that the Stacks staff of Van Pelt-Dietrich Library Center has curated its latest Featured Books exhibit celebrating summer travel. “To me, the quintessence of traveling is learning and discovery,” says Eileen Kelly, Head of Collection Management. “And for me, reading and travel are inextricably linked. Books are a way to travel; a book itself can be a destination.”

Many of the holdings featured in the exhibit are, indeed, intellectual “destinations” in their own right apart from their subject matter. One such title is second-century geographer Pausanias’ landmark two-volume Guide to Greece (1971; original ca. 2nd-century CE). The text, ostensibly a treatise on Greek topography and architecture, recurrently embarks on what Kelly describes as “wild digressions” into Classical mythology and literature; for example, Pausanias follows in the footsteps of Homer’s Iliadic heroes to visit the ruins of Troy. His Guide thus acts as a crucial link between historical fact and Classical lore, worthwhile reading for modern-day travelers, scholars, and Hellenophiles alike.

Other selected titles, such as In Darkest Alaska: Travels and Empire Along the Inside Passage (2007); Travel Writing from Black Australia: Utopia, Melancholia, and Aboriginality (2016); and Walter Starkie’s classic Raggle-Taggle: Adventures with a Fiddle in Hungary and Roumania (1933), serve a similar historiographical function to Pausanias’ Guide, albeit each with a more markedly ethnographic bent. Starkie’s work, for instance, chronicles the author’s perambulations through central Europe in 1929 (which he financed in part by fiddling en route). The text represents an intimate, immersive account of the Romani people — aka “Gypsies” — just before the Holocaust, documenting a centuries-old culture that was soon thereafter decimated by the violence of history.

Even the more conventional guidebooks in the exhibit have much to offer beyond city maps — including seemingly “outdated” volumes. “You might ask yourself, ‘Why does a library have a 36-year-old travel guide?’” muses Kelly in reference to John Freely’s Blue Guide to Istanbul (1983). “This book contains exquisitely detailed descriptions of local architecture, history, and lore that still hold true, despite the passage of time.” Kelly notes the “democratizing” effect of such a well-researched, well-written guidebook: “You might be a complete architectural novice standing in a 4th-century Byzantine church, but if you have a good guidebook, you understand what the cultural relevance of the tympanum in front of you is. A good guidebook enriches your whole experience.”