In This City Of Libraries, Temple and Penn Collaborate To Ensure Summer Access 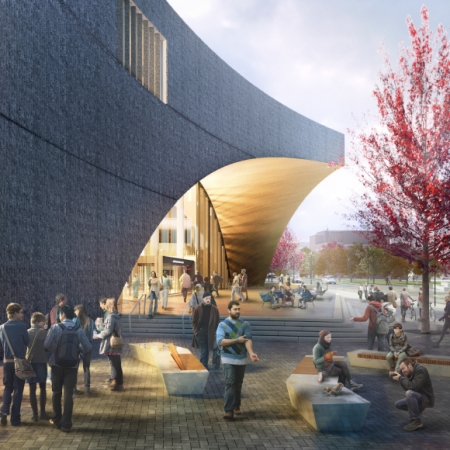 On May 9, Paley Library — the main campus library of Temple University — officially shut its doors to the public. The closure marked the advent of the summer-long relocation of Paley’s physical collection to Temple’s landmark Charles Library, which will officially open at the beginning of the fall semester. Temple affiliates will not have access to the library’s physical collection in the interim.

Joe Lucia, Dean of Temple Libraries, and Constantia Constantinou, H. Carton Rogers III Vice Provost and Director of the Penn Libraries, saw this temporary inconvenience as an opportunity for collaboration between neighboring institutions. Thus, the Temple and Penn Libraries are pleased to announce that all Temple affiliates have courtesy borrowing privileges from and library access to Penn’s collections throughout the summer.

“We’re honored to host our friends and colleagues from Temple at the Penn Libraries,” says Constantinou. “And we’re absolutely thrilled about Charles Library, which marks a major achievement in modern monuments to knowledge.” The facility will feature 2,000 total seats of study space, 1.5 million circulating volumes, and the Loretta C. Duckworth Scholars Studio — a multipurpose suite boasting 3D scanners and printers, digitization equipment, and breakout rooms.

“Philadelphia is a city of libraries and a home to cultural knowledge,” Constantinou explains.

In 1731, Penn founder and first president Benjamin Franklin helped establish the first subscription library in the country, the Library Company of Philadelphia, which offered people of modest means access to its members’ pooled collection of books. (Nearly three centuries later, the Library Company is still extant and operating out of the Ridgeway Library on Locust Street.) The Free Library of Philadelphia was chartered in 1891 and originally housed in three small rooms inside of City Hall; today, the Free Library has 54 branches serving neighborhoods throughout the city.

The Penn Libraries were founded in 1750 with a single donation from cartographer Lewis Evans, grown under the tenure of Franklin, and currently comprise 15 individual libraries with over six million book and serial volumes. And now, Temple University is introducing an inspiring and diverse new environment to encourage and support intellectual inquiry, group and individual learning and study, and scholarly research for current and future generations of students, researchers, the broader community in the city of Philadelphia, and beyond.

“We are grateful to Penn for welcoming the Temple community into their library facilities as we prepare for this transformative moment at our university,” says Lucia. “Charles Library will be a forward-thinking intellectual and cultural hub at the heart of Temple, and we look forward to sharing our new space with the greater Philadelphia region, including the Penn community, when we open this fall.”

In order to enter any Penn Libraries buildings, Temple affiliates have to show a valid photo ID; in order to register for borrowing and access privileges, Temple affiliates must be in good standing with their University library and must visit the Van Pelt-Dietrich Library Center circulation desk with their valid Temple University Owl Card. Guidelines are available here.

To learn more about the new Charles Library, visit library.temple.edu/newlibrary.