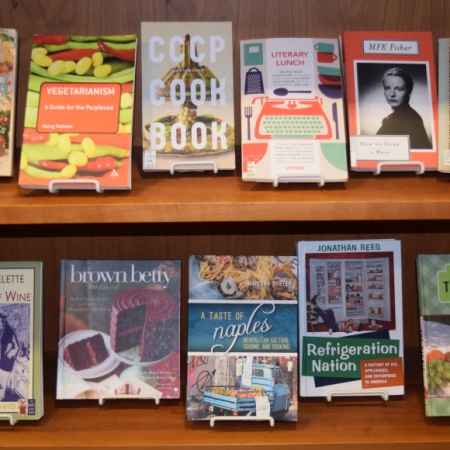 “First we eat, then we do everything else,” renowned foodie MFK Fisher once wrote. In celebration of the cultural significance of food, May’s Featured Books Display in the Van Pelt-Dietrich Library Center will spotlight titles related to “Food & Cooking.” The exhibit features both cookbooks as well as a broad selection of food-related holdings, with sub-topics ranging from cinema to Judaism to railroads to Shakespeare.

“This Featured Books is proving to be the most popular yet,” says Eileen Kelly, Head of Collection Management. “Twenty percent of the display has already been checked out. Everybody loves food!” The idea came from Kelly’s regular co-curator, Van Pelt clerk Megan Brown. “When Eileen and I first starting talking about Featured Books themes, I immediately said, ‘Oh, we’ve got to show off the Library’s food books!’,” Brown recalls. Kelly adds, “People seem surprised that the Library has these holdings, so it’s helpful to get them out on display.”

Brown and Kelly pulled largely from call numbers TX (on the third floor) and GT (on the fifth) and, as usual, attempted to cast as wide a thematic and regional net as possible. The Revolution Will Not Be Microwaved (2006) thus sits alongside Encarnación’s Kitchen: Mexican Recipes from Nineteenth-Century California (2003); Cupcakes! (2005) shares shelfspace with Combat-Ready Kitchen: How the U.S. Military Shapes the Way You Eat (2015). Brown’s favorite title from this month’s display is Jason C. Anthony’s Hoosh: Roast Penguin, Scurvy Day, and Other Stories of Antarctic Cuisine (2012) — she’s delighted by its strange specificity — while Kelly loves the state-by-state arrangement of America: The Cookbook (2017). “It’s so beautifully laid out that it looks more like a primer on graphic design than a cookbook,” says Kelly.

Indeed, aesthetic appeal was one of the criteria for which Kelly and Brown selected; they wanted to create a particularly charming display for May to offset the stress of spring semester finals. This month’s Featured Books therefore has fewer items than usual, with five shelves of “face-out” covers and only one shelf of “spine-out” titles. Another element unique to the Food & Cooking Featured Books is that it’s the first such installation to include volumes from Penn’s off-site Libraries Research Annex, LIBRA. “This was a very deliberate choice,” Kelly explains. “We want students to know that the holdings in LIBRA are an integral part of the Library’s collection, and that they’re easily accessible.”

A further deliberate choice that Kelly and Brown made was to exclude beverages from the Food & Cooking booklist: given the profusion of pages dedicated to coffee, wine, tea, beer, and liquor, the co-curators decided to plan for a separate libations display at a future date. As for the rest of this summer, June’s Featured Books will celebrate Pride Month; July will feature books about travel; and August will showcase local interest. “As always, students, faculty, and staff are welcome to contact me with suggested titles or suggestions for future themes,” says Kelly. She can be reached at eikelly@upenn.edu.