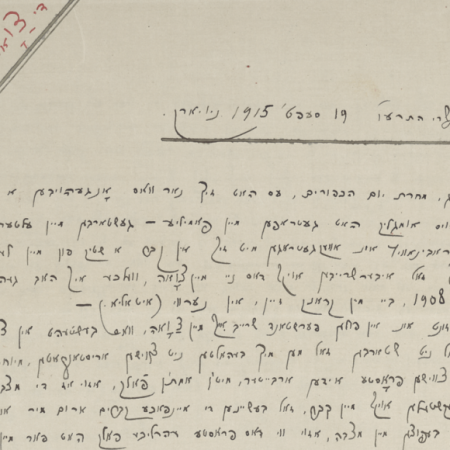 A generous gift from Robert V. Waife, great-grandson of the writer Sholem Aleichem and President of the Sholom Aleichem Network, Inc. will bring two iconic documents of American Jewish History, the handwritten ethical will and tombstone epitaph of celebrated Yiddish writer Sholem Aleichem, to the Penn Libraries. When he learned about the gift, Arthur Kiron, Penn Libraries’ Schottenstein-Jesselson Curator of Judaica Collections said he was thrilled to be receiving these precious documents on behalf of the Penn Libraries. “This is one of the most meaningful gifts I have ever had the privilege of stewarding in my nearly two decades working at Penn,” said Kiron. “To me, these are not only iconic pieces of Judaica Americana; they also speak to the profound humanity of their author and provide a moral compass for us all.”

Sholem Aleichem, born Sholem Naumovich Rabinovich in 1859 in the Ukranian shtetl of Pereyaslav, is best known as the author of a series of stories called Tevye the Dairyman, which later became the famous musical, Fiddler on the Roof. This pen name, which means “peace be upon you,” refers to the popular Jewish greeting and conveys the familiar yet already nostalgic tone by which he sought to reach his uprooted public through writing. Aleichem, who described himself on his tombstone epitaph as a “plain and simple Jew who wrote in plain and simple prose,” was a beloved figure whose stories of laughter through tears profoundly resonated with common people.  “Let my name be recalled with laughter,” he wrote in his Ethical Will, “or not at all.” Over a hundred thousand people crowded the streets of New York City in May of 1916 to mourn his passing. His death and mass funeral was publicized on the front page of the New York Times along with a printing of his Ethical Will.

Prof. Kathryn Hellerstein, Ruth Meltzer Director of Penn’s Jewish Studies Program and Associate Professor of Germanic Languages and Literatures feels that the two documents represent an “immeasurable treasure” for Penn’s Judaica collections that will benefit Penn scholars and teachers for generations to come. According to Hellerstein, Aleichem’s Ethical Will, “Fits into the long tradition of Jewish ethical wills with humility and yet is well aware of the value that his legacy holds for the future of Yiddish Literature.” Hellerstein feels that this document, “Expresses the generosity of spirit and love for Yiddish culture and the Jewish people characteristic of Aleichem’s greatest works of fiction, as well as his affection and concern for the well-being of his children, his grandchildren, and their future generations.”

When asked to comment on the gift’s impact to Penn’s history scholars, Moritz and Josephine Berg Professor of History and Department Chair Beth Wenger said, “Aleichem provided generations of Jews with a rich and mythic view of their collective pasts.” “These remarkable documents provide future generations with an unparalleled glimpse into his of the extraordinary life and legacy.” The department’s Director of Graduate Studies, Associate Professor and Russian and Eastern European Jewish History specialist Benjamin Nathans stated, “Sholem Aleichem reveals once again in these extraordinary documents how the predicaments of Russian Jewry prefigured our own, while seamlessly blending the roles of paterfamilias and people’s author.”

The Penn Libraries is humbled by the opportunity to house these documents and expresses deep gratitude to Robert Waife for bestowing this collection to us.