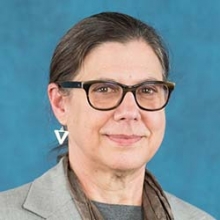 Rebecca is Associate University Librarian for Academic Engagement & Director of Arts and Culture Libraries with collection and liaison responsibilities for Classical Studies and liaison responsibilities for Russian and East European history and literature. She holds a B.A. from St. Olaf College and a Master's of Library and Information Science from the University of California, Berkeley, and is proficient in Russian, French, and German. Rebecca has pursued research interests within the areas of music, ethnic American autobiography, library preservation, open access, and contemporary American literature.

Rebecca joined the University of Pennsylvania Libraries in summer 2011 from Grinnell College where she served as Collection Development and Preservation Librarian, overseeing monographic and serials collections and acquisitions, with liaison responsibilities including American Studies, Classics, French, German, Music, and Russian and East European Studies. She began her career at the University of Kansas as a reference librarian and bibliographer for Germanic languages and literatures.