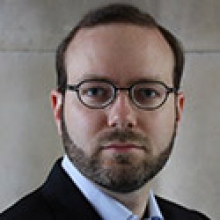 Nick is the Lawrence J. Schoenberg Curator at the Schoenberg Institute for Manuscript Studies and Medieval Studies Librarian at Penn Libraries. His teaching and research focus on manuscript illumination and its intersection with other media in fifteenth- and early-sixteenth-century Europe.

Nick received his doctorate in 2014 from the Institute of Fine Arts, New York University, with a dissertation focusing on the French Renaissance court painter, Jean Bourdichon. Prior to arriving at Penn in 2016, Nick has held fellowships at the Université de Montreal, the Courtauld Institute of Art, and the Metropolitan Museum of Art. From 2007 to 2010, he worked in the department of Medieval and Renaissance Manuscripts at the Morgan Library and Museum in New York. He has contributed to numerous catalog and exhibition projects in Europe and North America, and has published articles in Word and Image, Burlington Magazine, Journal of the History of Collections, Manuscripta, and Gesta. His books include Le livre enluminé, entre représentation et illusion (2018), Making the Renaissance Manuscript: Discoveries from Philadelphia Libraries (2020), and, co-written with Anne-Marie Eze, Bourdichon's Boston Hours (2021). In Spring 2020 he was Craig Hugh Smyth Fellow at Harvard University's Villa I Tatti.