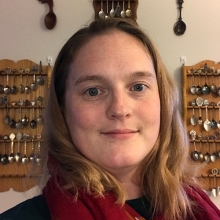 Karin Gilje is the 2020 Bollinger Fellow at the Penn Libraries.

Before coming to Penn, Karin worked at the Illinois Institute of Technology in Chicago on the PROSPECT Experiment, a reactor neutrino experiment, and at the University of Alberta in Edmonton, Canada on the SNO and SNO+ experiments, searching for solar neutrinos.

She graduated from St. Olaf College in 2008 with a double major in Physics and Mathematics (almost a triple major with Ancient Studies). Then, she continued her education with a PhD in High Energy Physics at Stony Brook University, received for work on the T2K experiment in Tokai-Mura, Japan. At Stony Brook, she received the John Marburger III Fellowship for Science, Engineering & Mathematics. In addition, the T2K collaboration received the Breakthrough Prize in Fundamental Physics for their work in neutrino oscillation physics.