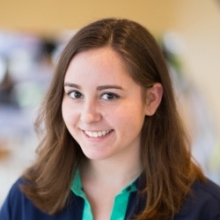 As the inaugural Kaplan Curator, Emily Esten spearheads projects that facilitate access to and use of Penn's Judaica collections, promoting them and making connections between them and dispersed Judaica content around the globe. She is also responsible for curating, building, and researching the Arnold and Deanne Kaplan Collection of Early American Judaica. In addition, she coordinates Scribes of the Cairo Geniza project.

In addition to her role at the Penn Libraries, she is the Web Manager for Contingent Magazine and the Director of Communications for the National Emerging Museum Professionals Network. Previously, she worked at the Edward M. Kennedy Institute for the United States Senate and at Brown University.

Emily holds a Bachelor of Arts degree, with majors in history and digital humanities, from the University of Massachusetts Amherst and a Master's Degree in public humanities from Brown University.