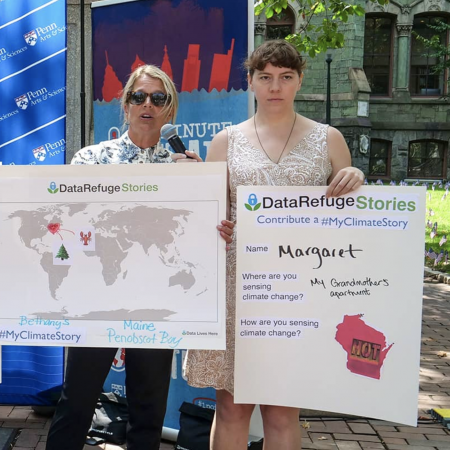 “I’ve always been a nature nerd,” says Margaret Janz, who was trained as a science librarian and currently serves as the Scholarly Communications and Data Curation Librarian at the Penn Libraries.

The lecture was part of PPEH’s My Climate Story initiative. “The quantitative data that climate scientists gather with sensors show how climate is affecting the ocean and the atmosphere — but it’s also affecting us,” Janz explains. “We’re able to sense climate change with our bodies and through our lived experiences.”

The story that Janz shared took place during an unusually warm summer in her home state of Wisconsin. The air conditioner in Janz’s grandmother’s apartment seemed to be malfunctioning, and her landlord insisted that it wouldn’t qualify as an emergency maintenance situation if her air conditioning failed.

“But it would have been an emergency,” says Janz. “There was an excessive heat warning, and people in Wisconsin aren’t equipped to deal with that kind of weather, which is becoming increasingly common. It’s especially difficult for senior citizens.”

Given her involvement with My Climate Story, Janz was a natural choice to lead one of the Weekly Themed Wellness Walks, organized by the Penn Libraries in collaboration with the Penn Center for Public Health Initiatives.

“The idea behind my Wellness Walk springboards off of My Climate Story: our bodies are sensors for climate data that we relay through stories,” says Janz, whose walk — titled "Sensing Climate" — will take place this Wednesday, December 18. “So we’re going to walk and talk about how we’re sensing that the climate has changed — how December used to be colder, how it used to be less windy, and so forth.”

The changes, Janz notes, are not confined to weather patterns. Fall foliage has been dulled and disrupted; invasive species are better able to survive the milder winters; tick-borne diseases are proliferating; and birds seem to be shrinking in size.

“When we talk about climate change, we often talk about the future and the global effects it will have — but it’s happening now, locally,” says Janz. “We’re experiencing it here and now. We need to share our observations and stories so that we understand that it’s happening.”

Other members of the My Climate Story group will attend Janz’s Wellness Walk to facilitate conversation about the ways in which climate change is already affecting Philadelphia. One example which Janz recently shared on Twitter is the regular track-work — necessitated by two years of atypically wet weather — which has shut down Saturday train service near her house.

Janz will make sure that her Wellness Walk isn’t just another exercise in apocalypse fatigue, however. “While these conversations are necessary, I don’t want to bum everybody out!” she says. “We’re going to talk about steps that the University is already taking, steps that the city is already taking, and how we might accelerate climate action. We, as individuals, have the power to impact our collective footprint.”