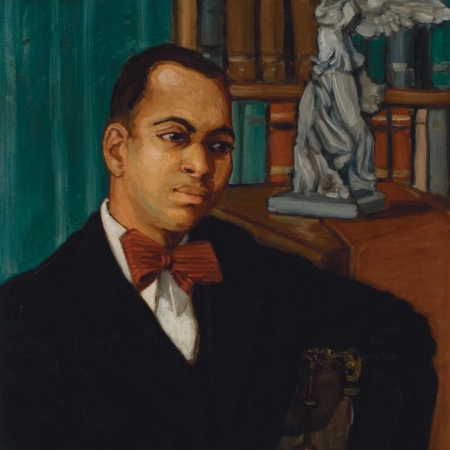 The current Featured Books display celebrates the centennial of the Roaring Twenties by showcasing titles outside of the “typical” thematic parameters of the era.

“In planning this display, we realized that our sense of the 1920s was somewhat narrow,” says Eileen Kelly, Head of Collection Management, who regularly co-curates Featured Books with Library Assistant Megan Brown Olsen. “So we selected works from around the world and tried to include as many original voices as we did retrospective studies.”

And beyond jazz and prohibition — strictly American phenomena — this month’s Featured Books duly represents the global political turmoil of the 1920s. Majd’s From Qajar to Pahlavi (2008) chronicles the before-and-after of the 1925 Iranian regime change; Ewing’s The Age of Garvey (2014) documents the career of Jamaican activist Marcus Garvey; and A Formative Decade (2015) investigates the aftermath of the Irish War of Independence.

Even in selecting titles on familiar subjects, Kelly and Olsen opted for unconventional routes. “We wanted to push the boundaries of the popular conception of the twenties by being more representative,” says Kelly. Thus, their selection for baseball, Overmyer’s Black Ball and the Boardwalk (2014), commemorates the Bacharach Giants, co-founding members of the Eastern Colored League. One of their selections for suffrage — 2020 marks the 100th anniversary of the 19th Amendment — is Schuyler’s The Weight of Their Votes (2006), which examines how both black and white Southern women defied patriarchal pressure in exercising their newfound political power. And Whitaker’s Smoketown (2018) argues that the Black cultural Renaissance in Pittsburgh was as significant as the contemporaneous one in Harlem.

“The 1920s were also an interesting time for books as objects,” says Kelly. “There were a great number of vanity presses, so we wanted to share examples of what publishers were doing in that period.” Included in this month’s exhibit, then, is Laurence Sterne’s A Sentimental Journey Through France and Italy (1929), which, although originally published in the late eighteenth century, is the Libraries’ only Black Sun Press edition still in general circulation. And a first edition of Countee Cullen’s Color (1925), published by Harper and illustrated by Deco artist Charles Cullen (no relation), will be displayed in a cradle to encourage patron perusal.

The titles in Featuring LIBRA are either available only at LIBRA or are currently checked-out from the Libraries’ on-site collections. These displays feature open (rather than spine-out) volumes, so Featuring LIBRA themes incline toward the visually engaging; the first display premiered in November and commemorated the 100th anniversary of the founding of the Bauhaus art school.

The thematic overlap of this month’s Featured Books and Featuring LIBRA was intentional. “The Harlem Renaissance blossomed in the 1920s, and February is Black History Month,” Kelly explains.  Other authors and subjects common to both displays include Louis Armstrong and Arturo Alfonso Schomberg (whose collection of African historical materials led to the establishment of the Schomburg Center for Research in Black Culture at the New York Public Library).

Next month’s Featured Books will celebrate Black History Month; selected titles will be tweeted out throughout February.