Diversity in the Stacks: Ethnicity in the Ancient World

Posted on September 2, 2020 by Rebecca Stuhr and Cheyenne Riehl 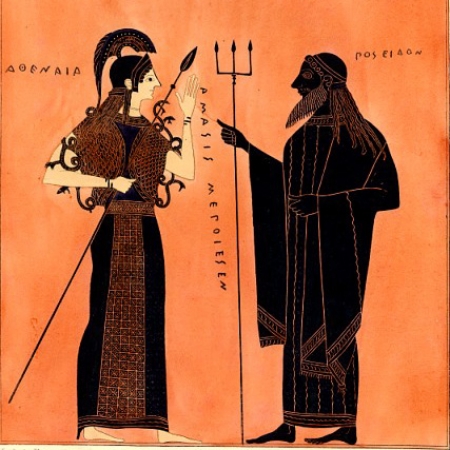 There are multiple ways to investigate the concept of “ethnicity” in the ancient world. The first is to examine how (or whether) ancient cultures thought about ethnicity or race. Scholars generally concur that Greek and Roman cultures did not think in terms of race and ethnicity: the ancients may have thought more in terms of borders, conquests and alliances, language, and communication. Ancient Greeks and Romans seem to have thought in terms of us and them, whether “them” might be “not-Greek,” “not-Athenian,” or “not-Roman.”

This question of how the ancient people thought in terms of their own cultural or military superiority — who did or didn’t qualify as a citizen — has sparked scholarly controversy over multiple decades.  In Black Athena: The Afroasiatic Roots of Classical Civilization (1987), Sinologist and linguist Martin Bernal initiated a fraught (and ongoing) scholarly conversation about the African influences on ancient Greek culture and language.

This conversation was long overdue. As the Society for Classical Studies recently noted, there had been a centuries-long effort among many European scholars to read or interpret ancient texts, cultural artifacts, and extant evidence so as to support “the misleadingly reductive notion of a ‘Western Civilization’ resulting from an allegedly linear transfer of knowledge from Greece to Rome to Western Europe; [and] the whitewashing of ancient Mediterranean culture.” Moreover, some of these scholars manipulated historiography to justify European and Euro-American slavery, imperialism, and colonial subjugation.

Historically, this scholarly manipulation of history has affected ideas of what “counts” as the ancient world (including Greece and Rome, excluding Persia, India, China, and Meso- American cultures), of the meaning of Western civilization, and of whom inherits the intellectual legacy of the Classical world.

Not uncommonly, professional fields and institutions have marginalized voices of scholars who fell outside of a white European hegemonic view (among other ways, by imposing structural limitations on opportunities for education and academic participation). Until recently, this has prevented a diversity of voices and perspectives from enriching scholarly interpretation and approaches.

Indeed, Bernal notes in his first volume that he worked on his project for eight years before discovering the work of African and African-American scholars and writers who had pursued an historical trajectory similar to his. Notably, Bernal mentions Senegalese scholar and trained Egyptologist Cheikh Anta Diop (1923-1986).

Diop first presented his findings at the Congress of Black Writers and Artists in 1956. His publication, The African Origin of Civilization: Myth or Reality (1974; 1989), is an authorized English translation derived from selections from two of his earlier studies, which appeared in French, Nations negres et culture (1954) and Anteriorite des civilisations negres: mythe ou verite historique? (1967).

Both men’s life-long scholarly projects were to raise the self-esteem and self-perception of African Americans. Ben-Jochannan, in fact, hosted tours to Egypt with this express purpose. In one interview, Ben-Jochannan explained that he “wanted people to see their faces were the same” as those represented by ancient Egyptian statues and hieroglyphs. (For a recorded interview with Ben-Jochannan, visit the History Makers database.). James, meanwhile, stated that his motivation was to

bring this information to the attention of the world, so that on the one hand, all races and creeds might know the truth and free themselves from those prejudices which have corrupted human relations; and on the other hand, that the people of African origin might be emancipated from their serfdom of inferiority complex, and enter upon a new era of freedom, in which they would feel like free men, with full human rights and privileges. (James 1954; 2018 “Aims of the Book”).

The views of these earlier writers resonate with what Bernal termed a “revised ancient model” which recognizes the significance of Egyptian influence on Greek culture. In Black Athena, he writes,

An even more powerful inhibitory factor to the restoration of the Egyptian aspect of the Ancient Model has been the fact that, unlike the champions of the Phoenicians, these black scholars have been outside academia. Thus, most of the writing on what G.G.M. James called the Stolen Legacy—Egyptian cultural achievements stolen by the Greeks—has been circulated among friends or published in very small editions; rapidly sold out to a passionately concerned public, but not considered as scholarship by academics, and not even stocked by libraries. (Bernal 429)

Over the two decades it took to complete Black Athena, Bernal was kept busy responding to the many reviews, articles, and monographs that engaged both negatively and positively with his work (Bernal 2001). If one of his goals was to disrupt and create discomfort for the long Eurocentric field of study, he succeeded.

Despite the academic  controversy around  Bernal’s actual scholarship (see especially, Lefkowitz’s Not out of Africa and Black Athena Revisited), the debates with his critics force contemporary scholars to examine the attitudes and conversations of a singular Western culture outside of the Classical realm. Ancient history has been employed by writers across languages and cultures to express and enforce colonial authority while perpetuating injustice against and oppression of minority groups, those of African descent in particular (see Wiesen 1980, Richard 2009, Harrington 2008.)

But this wasn’t the full story. Long before Bernal’s seminal work, scholars in different disciplines discussed and readapted the Euro-centric ancient model in order to challenge colonial foundations and draw upon the original literary motifs of resistance and liberation. For example, W.E.B. Du Bois’s first novel, The Quest of the Silver Fleece (1911, 2007), draws themes and motifs from the ancient Greek tale of Jason’s quest for the golden fleece. In this contemporary novel, however, “the silver fleece” is cotton, and DuBois’ tale is one of economic subjugation rather than heroic exploit.

Decades later Toni Morrison, in her novel Beloved (1987), evokes the tragic character of Euripides’ Medea, molding the classical piece to touch on the complexities and struggles of freedom for formerly enslaved Americans.

The adaptation of Classical characters, themes, and storylines is likewise present in works such as Derek Walcott’s Omeros (1990) (the Odyssey), Ishmael Reed’s The Last Days of Louisiana Red (1974) (Oedipus), Jessie Fauset’s The Chinaberry Tree: A Novel of American Life (1954) (Greek Tragedy broadly), and others. The reappropriated dramatic elements transcend the boundaries of culture, as they represent the essential experience of being human.

Bernal’s scholarship remains controversial to this day. Some of the texts listed below build on Bernal’s findings, and others continue to argue with his conclusions. Undeniably, Bernal brought earlier scholarship from marginalized voices to the attention of the academic establishment. Today, the scholarship and the teaching of ancient history and literature clearly reflects a move away from the Eurocentric approach which Bernal problematized.

A Selection Scholars and Scholarship