“Incredibly, this small but impressive collection wasn’t being used — not for research, not for exhibits, not for illustrations within Penn Museum displays,” says Stewart. “So we wanted to find a way to bring attention to the collection and to inspire people to think about how rare books like these could be implemented for research.” That is, Stewart wanted to help specialists and non-experts alike understand “what questions could be asked of these books, as well as what makes these books interesting.”

In that spirit, the Museum Library staff created “Off the Shelf,” a series of pop-up exhibits scheduled from 3PM to 4PM on the last Friday of every month. The Off the Shelf series invites the Penn community and Penn Museum visitors to learn about Penn Libraries holdings through the lens of a tailored theme. “These exhibits are a fantastic opportunity to highlight the role of Penn Libraries and research to Museum visitors,” says Stewart. “And to let them know that, while they [Penn Museum visitors] can’t check books out of the Museum Library, they are always welcome to come in and peruse our collection.”

To date, Off the Shelf exhibits have covered geography from north Africa (“Description de l’Egypte, 1809-1828”) to east Asia (“Collecting China”) to Penn’s own campus (“Why is the Museum Lopsided? The History of the Museum Building through Archival Documents, Photographs, and Drawings”). The most recent pop-up, “Judge a Book by Its Cover,” was co-curated by Stewart and Marah Blake, the Museum Library Programming and Instruction Intern.

Stewart’s presentation chronicled the nineteenth-century developments in production technique that ultimately enabled middle-class readers to amass personal libraries. Publishers transitioned to machine production, used cheaper papers and binding materials, and glued — rather than sewed — “text blocks” (i.e., the pages) to “cases” (i.e. the front and back cover plus the spine). The result was that books became radically more affordable in Europe and the U.S. — and, as a consequence, the adult literacy rate spiked. Stewart also outlined the shifting conventions for bookbinding ornamentation over the course of the nineteenth century. Materials, motifs, coloration, and design all underwent changes in vogue, some occasioned by necessity; for instance, the English cotton shortage consequent the American Civil War forced publishers to use alternative fabrics for case coverings.

The Museum Library aims to make such historical conversations relevant to modern discourse. “Even with older texts, it’s still a contemporary discussion,” says Blake. “One of our goals with these exhibits is to acknowledge the colonialist and imperialist backgrounds of archaeology.” Blake alludes to the November 2018 pop-up, “South Asian Religions through Colonial Eyes,” which explored how depictions of Eastern religions in anthropological texts shaped Western perceptions of South Asian populations. June’s Off the Shelf exhibit will examine rare books in the field of bioanthropology, which was, in the nineteenth century, oftentimes entangled with scientific racism. “We’re attempting to look at our own disciplinary history in a very nuanced way with these exhibits,” explains Blake. Stewart agrees: “Twenty-first-century museum curators, anthropologists, and archaeologists want to confront the sometimes uncomfortable history of their own academic disciplines, and to expand perspectives moving forward,” she says. 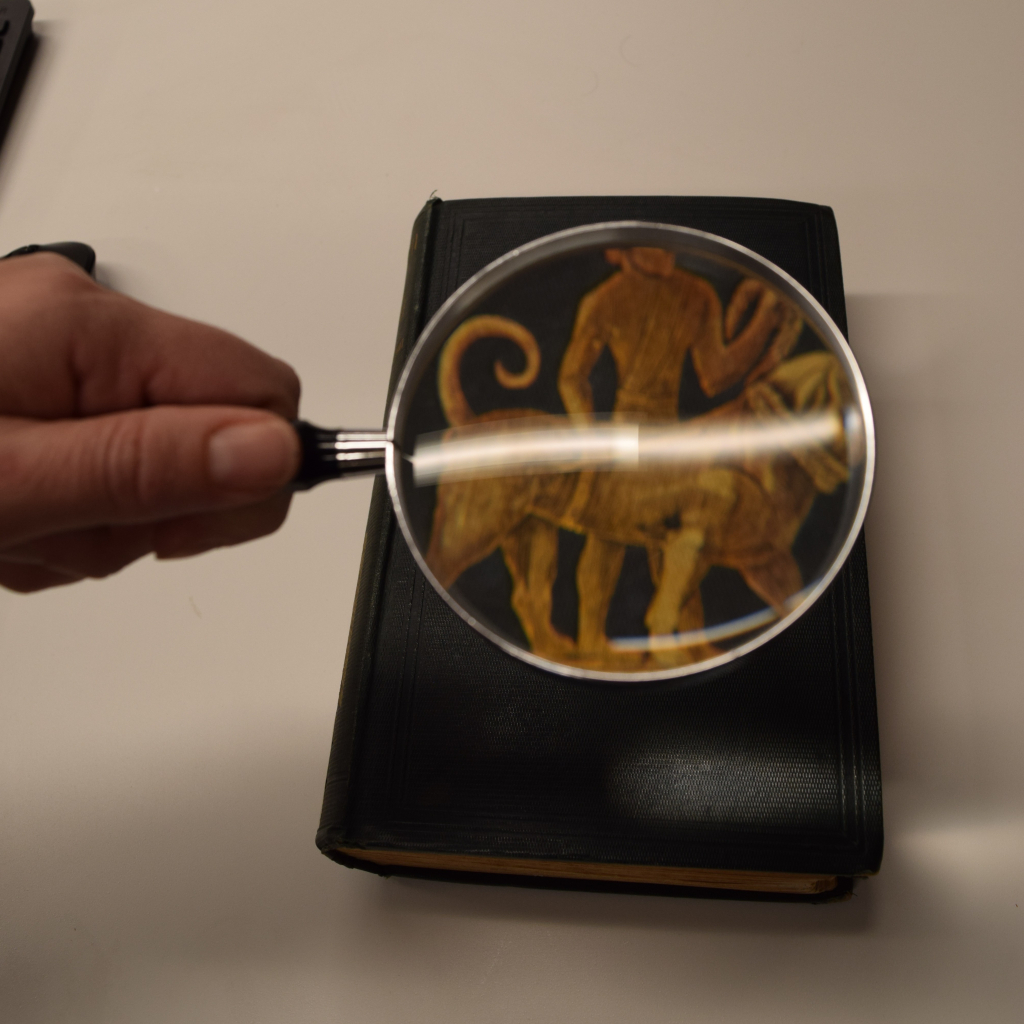 Stewart and the Museum Library staff especially hope to draw undergraduates to Off the Shelf events to participate in this process — and to inspire them to engage critically with the materials. “We’ve found there’s an interesting story behind almost every book in the collection here,” says Stewart, “so there’s extraordinary potential for research.” Fortunately, because the pop-up format is transportable, Stewart has been able to bring Off the Shelf onto campus to more readily accommodate undergraduate audiences. For instance, in February, a graduate advisor asked Stewart to stage an exhibit in the Ancient Studies residence hall, Harnwell College House. Stewart pulled a selection of particularly compelling books from the Museum Library’s shelves and guided a group of rapt Ancient Studies undergraduates through a bibliothecal scavenger hunt. “Even when the food arrived, the students stayed put, they were so enthralled,” laughs Stewart.

Check out the Museum Library’s full schedule of events and workshops here: https://guides.library.upenn.edu/muselibworkshops