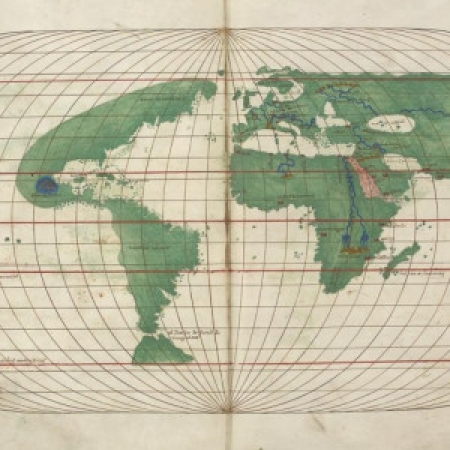 Carton Rogers III Vice Provost and Director of Libraries Constantia Constantinou is proud of the Penn Libraries’ long tradition of supporting medieval studies at Penn. “From a dedicated medieval studies resource room on the fourth floor serving students and faculty for over forty years to the 2013 donation of the Lawrence J. Schoenberg Manuscript Collection that established the Schoenberg Institute for Manuscript Studies, Penn Libraries aims to makes the many strengths of its collections and expertise available to students and scholars of the Middle Ages at Penn, in Philadelphia, and around the world,” says Constantinou. This week, the libraries will get the chance to share our resources with medievalists from around the world at the 94th Annual Meeting of the Medieval Academy of America, occurring on Penn’s campus from March 7th-9th.

The meeting represents a broad partnership between the Penn Libraries and the College of Arts & Sciences as well as other Philadelphia-area institutions including Bryn Mawr College, the Delaware Valley Medieval Association, Haverford College, St. Joseph’s University, and Villanova University. The meeting’s theme focuses on the “global turn” in medieval studies, treating the Middle Ages as a broad historical and cultural phenomenon that encompasses the full extent of Europe as well as the Middle East, Southern and Eastern Asia, Africa, and the Americas.

Lynn Ransom, Curator of Programs at Penn Libraries’ Schoenberg Institute for Manuscript Studies, has played an integral role in planning the meeting, serving as co-chair of the Program Committee with Julia Verkholantsev, Associate Professor of Russian and Eastern European Languages at University of Pennsylvania, and founding director of Penn’s Global Medieval and Renaissance Studies program. “It is exciting for the Penn Libraries and the Schoenberg Institute to be able to showcase the latest cutting-edge research and technologies in manuscript studies in the context of this event. Planning the meeting has been a truly collaborative effort between curators and faculty and highlights the Penn Libraries’ unique ability to engage scholars across disciplines and geographic boundaries through the study of the pre-modern book,” says Ransom.

Ancillary activities at the meeting will broadly engage Penn Libraries’ resources. Digital demonstrations, which will feature the Bibliotheca Philadelphiensis project (which has digitized over 450 manuscripts from institutions in and around Philadelphia), the Schoenberg Database of Manuscripts, and virtual reality systems will be held during each day’s lunch hour.  In addition to exhibiting our digital resources, we will also be pulling remarkable pieces from our special collections for a variety of exhibitions. Each day of the conference will feature a different graduate student curated pop-up exhibition in the Henry Charles Lea Library; the more permanent exhibits, “Old Enchanted Pile: Recovering the Alhambra in Plaster Casts and Prints” and “Global Perspectives on the Medieval Past,” will be on display in the Fisher Fine Arts Library and Snyder-Granader Alcove.

More information about the meeting can be found on the Medieval Academy of America’s website.