Fairman Rogers and the Age of the Horse 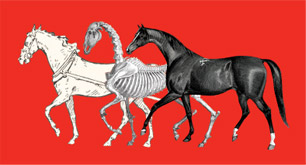 This exhibition, which examines the expanding role of the horse in nineteenth-century industrial America, highlights materials from the Fairman Rogers Collection of Books on the Horse and Equitation. Fairman Rogers, (1833-1900) stood at the intersection of nineteenth century interest in horses. A native Philadelphian, Rogers trained as a civil engineer, and taught at the Franklin Institute (1853-65) and at the University of Pennsylvania (1855-1871). Rogers was an original member of the National Academy of Science, and also a member of the American Philosophical Society. In 1871, Rogers became a trustee of the University of Pennsylvania, and was later instrumental in the founding of the School of Veterinary Medicine. A patron of the arts, he served on the board of the Academy of Fine Arts. He worked with Thomas Eakins, who produced the painting "May Morning in the Park," the first painting that attempted to show horses in motion using the photographs of Eadwaerd Muybridge. In 1884, Rogers helped bring Muybridge to Penn where he produced his extensive motion studies of humans and animals.

But Rogers was also an accomplished horseman, a member of Philadelphia's elite First Troop, and an internationally recognized expert in the art of driving. During the Civil War, while serving on the staff of General William F. Smith, Rogers developed a scientific program for training horses and riders in the army, based on the system of Francois Baucher, one of the leading authorities on riding in the 19th century. Rogers was the first man in America to drive a four-in-hand coach, and his book on coaching remains a standard in the field that is still in print. A Manual of Coaching (1895) is a technical guide to driving horses that combines knowledge of horse physiology and behavior with principles of mechanics and civil engineering.

The Fairman Rogers Collection at the Annenberg Rare Book Library at the University of Pennsylvania reflects Rogers' interests in horses, and their relationship to engineering, veterinary medicine and science. The collection, originally housed at the New Bolton Center Library of the School of Veterinary Medicine at Penn, contains almost one thousand books, most collected by Rogers himself but some added to the collection after his death during the first decades of the twentieth century. The earliest books date from the sixteenth century, but most are from the nineteenth century. These include a variety of medical guides for horse owners, stud books, and books on shoeing, harnessing, training, riding, driving, racing, keeping a proper stable, horse breeds, and horse breeding. The collection reveals the technical, scientific and social evolution of the nineteenth century horse world.

Remarks by Curator Ann N. Greene, lecturer in the Department of History and Sociology of Science at Penn and author of the forthcoming Harnessing Power: Industrializing the Horse in Nineteenth Century America